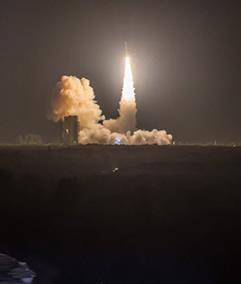 Scientific Lightning Solutions, LLC (SLS) was asked by Space Florida to provide precision lightning and transient monitoring for the Minotaur IV rocket and ORS-5 payload in the weeks leading up to the launch.  SLS deployed a series of custom electromagnetic sensors and current measurements connected to a Jupiter Transient Monitoring Surveillance (TMS) system to accurately quantify any direct or indirect lightning effects on the vehicle or payload.  No harmful transients were detected by Jupiter TMS during the pre-flight preparations and the vehicle launched on schedule.

SLS would like to congratulate the teams at Orbital ATK and Space Florida on a successful launch.  We look forward to working with you in the future.