Orbital ATK recently launched the CYGNSS hurricane monitoring satellite using a Pegasus XL rocket. The Pegasus XL rocket is an air-launched vehicle that is secured to the fuselage of an L-1011 aircraft. SLS deployed two Jupiter OLS lightning monitoring systems in addition to two Jupiter TMS systems to monitor the L-1011 aircraft while the rocket and satellite were undergoing testing and check-out operations on the Cape Canaveral Air Force Station skid-strip prior to launch. During the pre-flight checks, a strong thunderstorm blasted Cape Canaveral with frequent cloud-to-ground lightning. Using high-resolution data from the Jupiter OLS and Jupiter TMS systems, SLS engineers conclusively determined that the L-1011 aircraft, Pegasus XL rocket, and the CYGNSS satellite were not damaged by the nearby lightning events. As a result, the mission continued on-time and the CYGNSS satellite was successfully launched.

NASA’s Sean Potter explained, “The surveillance system was designed for NASA's Launch Services Program to document and assess potential deleterious effects of lightning strikes. The lightning surveillance system provided timely and accurate data that allowed for continuation of the Pegasus XL countdown despite numerous cloud-to-ground lightning strikes recorded that day. He also states that, “SLS provided outstanding support and was able to quickly provide information that was helpful in mitigating the concern and moving forward with the launch". 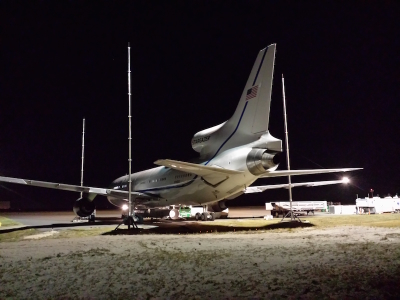